Frozen in time, the heritage-listed Burns Philp Building attests to the vital role that general merchants and shipping giants James Burns and Robert Philp played in the development of Queensland and its economy. The oldest surviving outpost, it was constructed in 1884 and continues to operate as the Normanton Visitor Information Centre and Library, as well as hosting the Indigenous Stock Workers and Rodeo Riders Displays.

See the resilience, spirit, and hard work of the Indigenous men and women who played a vital role in the establishment of the cattle industry in the Gulf Region, with a visit to the Indigenous Stock Workers and Rodeo Riders Displays.

Featuring images and artefacts, the displays include historic photographs of Delta Downs Station, Australia's first cattle station run by Traditional Owners. There are contemporary images and poems featured in the Rodeo Riders display, which will have visitors captivated. 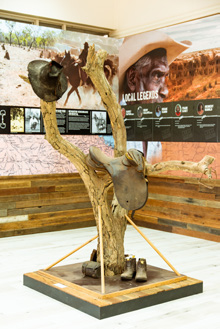 Take a ride on a working tribute to the early pioneers, onboard the Gulflander Train. Affectionately known as the ‘Tin Hare’ the Gulflander is a fully operational 1950 rail motor, that is said to travel from ‘nowhere to nowhere’ as this line was never connected to the state rail network. To this day it continues to venture through the countryside on a nostalgic journey between Croydon and Normanton, carrying a small number of passengers that are treated to morning tea, trivia, wildlife spotting, and storytelling.  If you miss the train ride,  be sure to visit the Normanton Railway Station, for a dose of Victorian architecture. 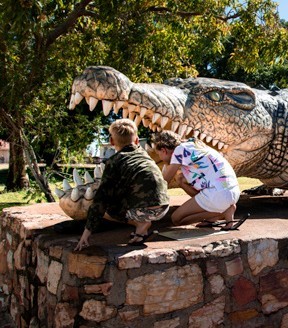 A petite Polish migrant, Krystyna ‘Krys’ Pawlowski, was immortalised in the Gulf, where she shot and killed an 8.6-metre-long saltwater crocodile on the banks of the Norman River in 1957. A replica now stands in the Normanton town centre, where it continues to boast status as the largest crocodile on record ever killed or captured in Australia.

Step back in time and discover the Gulf Region’s rich pioneering history by visiting Burke & Wills Camp 119, which includes 10 remaining blazed trees marked during the party’s occupation of the site.

The importance of this ill-fated mission is undeniable; the efforts of the search party, including William Landsborough, ultimately led to pastoral exploration and establishment in the region some years later.

At the end of  1934,  the British Government decided to implement an air service that would deliver mail to every country in the Commonwealth at a standard rate. The Short Brothers were tasked with building suitable transport, and claimed ‘we don’t build aircraft that float, we build ships that can fly’ upon release of the ‘Empire Flying Boats’.

The Catalina float planes used in Karumba were perhaps the best known and most-loved flying boat of all.

Qantas and British Overseas Airway Corporation (BOAC), established a base in Karumba to accommodate and refuel aircraft on route to London. They built the two most prominent buildings in Karumba to house their staff and maintenance crews. Known as ‘A’ and ‘B’ Block, these buildings served many purposes over the years including radio and communication bases during World War II, life as a hunting lodge, a school and a station run for mail delivery.

A Block was destroyed by fire; however, B block is still standing as a privately-owned residence.

The ‘FV Rama’ began her two-year survey of the Gulf in 1963. Some unusual shadows showed up on the echo-sounder 32km offshore in May 1964, it was a school of banana prawns. The Rama swung through the school twice and picked up 340kg of prawns, revealing the Gulfs’ potential as a commercial fishing ground and setting the scene for the great ‘Prawn Rush’. It is the old wharf bunded area where the first catch of commercial prawns was landed by Noel Sykes in 1964. The old wharf was demolished in 1993.